Coho on the fly - check!

Last weekend, I finally managed to get out with my Indiana stream expert buddy, Sam. Sam used to live here in the Chicagoland area, but moved up to Indiana a year or so ago. Since moving there, he has spent a TON of time fishing the many tributary streams that feed, and are fed by, Lake Michigan.

Our target was steelhead and our main presentations were flies and spawn. The spots we fished were shocking in the fact that they were either tiny, right in the middle of a bustling town, or running along some little drainage ditch by the roadway. These are the types of places you would look at and assume nothing is in there, but doing so would render your assumptions incorrect.

At one of our first spots, Sam and I both decided to start off by floating some spawn. After a half an hour or so, it was evident that the fish weren't into it. Sam decided to grab the fly rod and tied on a super tiny size 16 bead head prince. It wasn't long before his decision paid off as Sam exclaimed, "Fish on!". I looked to my right and saw Sam's fly rod bent in half. No more than thirty seconds later, the fish managed to spit the fly and send it shooting back into the trees. Disappointed, but not discouraged, we kept at it for a little while longer. 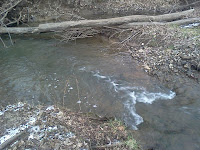 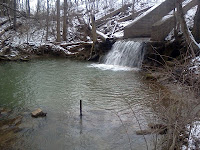 After not much more action, we moved spots to one of the neatest places I have ever seen. Its a place that you can't see from any roadway and you would never be able to find on Google Earth. I can't describe much more about its location so I will leave you with a couple of pictures.

As we got to this spot, Sam kept at it with his tiny nymph and I kept at it with the spawn. It didn't take long before I hooked up with my first fish of the day - a tiny little coho that is often referred to as a smolt. While excited, it was not on the fly so it wasn't worthy of any pictures. Knowing that the fish at this location were keyed in on spawn, I switched to a single globug egg and thoroughly worked this entire pool. Unfortunately, my little smolt seemed to have blown the spot as nothing else was happening.

Once again, we picked up and moved to another location. This spot was laughable to me at first because it just didn't make sense to me. As we pulled off the side of the road and looked at a corrugated pipe that fed a "stream" next to some gas station I said, "Really, Sam - this is where we are fishing?" He laughed and said, "Just wait, I have caught some of the biggest fish right here." With no choice but to trust him, I grabbed my fly rod and started working the pool with a small streamer. Nothing was happening so I tied on the globug egg again. This is when the magic happened!! Just at the end of a drift, my indicator shot down. I lifted on the rod and it was fish on! For some reason though, the fish didn't feel very big, although I could definitely feel the flurry of head shakes and tail kicks. I stripped the line in and finally laid eye on my first coho on the fly! I wasn't able to take pictures of it because Sam was on the other side of the stream and I didn't want to keep it out of the water too long. With that said, I took a picture of something else to give you a rough idea of size.... 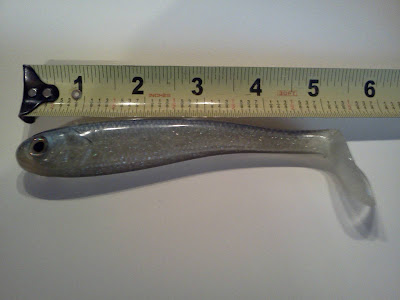 After catching a half dozen more of these, we moved down stream a bit to some other productive holes that Sam knows. After battling some more smolt, Sam hooked up with a biiiiiiig fish. After seeing this thing jump, I look at Sam and asked, 'What the hell is that?!" It came out of the water and flopped back down like the tarpon I see caught on WFN. Sam continued to fight the fish as we formulated a plan to actually land this thing. As I started to make my way down the steep and muddy bank towards the deep water, the unthinkable happened. Sam's rod tip snapped up and the line flailed through the air like a leaf blowing in the wind. There was nothing on the end - no fish, no bait, no hook. What a shame as this was easily the biggest steelhead that I had ever seen and the largest that Sam has ever tangled with. We kept working the hole in hopes of hooking up again. We even tried a couple more holes up and down stream to no avail.

By this time, the sun was going down, our lines and guides were starting to freeze, and we were beat. With that, we called it quits and headed home. I am sure Sam cried a little once we parted ways...I know I would have. Still, it was a great time and I am energized and excited to know that fishing like this is less than an hour from my door step. I will be back and be back often...