Why the fly is this happening?

If anyone has really read this blog more than once, it would be easy to conclude most of my fish wrangling has been done with the old rod and reel, the caster of baits, and rods with butts stiffer than...(I got nothing here) 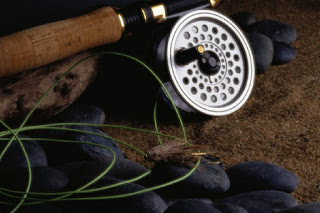 Anywho, this past spring a friend of mine asked what I thought about fly fishing. My short answer was, "Always wanted to learn, but it sure looks hard." Before I knew it, we were in a field by mi casa and I was listening to a self-taught bug slinger direct me on the fundamentals. Before too long, I had line flying a good fifty feet or so and laying down relatively straight – by straight, I mean if a person was to take a field sobriety test and take the same path as my line, he would probably be going to jail but at least he wouldn't be walking in circles. Not much longer after starting this first and only lesson, our fingers were numb and our boogers were frozen - end of the lesson, but he said “hold on to this rod and learn with it.”

Throughout the year, the weather got warmer and the fish started biting. Whenever the chance arose to get out there, my time was limited and I continuously found myself trusting in what I knew better. Sure, I would bring the fly rod every so often and I would even give it a whip or two back and forth only to ultimately pick up what I knew better. 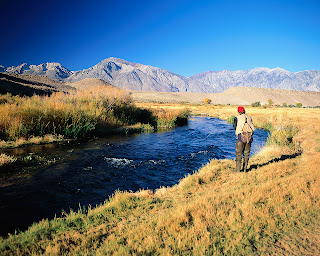 Just the other weekend, a friend of mine and I went to go chase some steelhead in some of the Lake Michigan tributaries. Once again, I brought the fly rod along with my conventional gear. This time however, I found myself more interested in wanting to sling some flies. I had a white bunny-like fly that was really meant for some pike/bass action but I intended to tie on an egg sucking leech once we reached the stream. Unfortunately, once I was steam side, I realized that I had left my fly box in the truck which left me feeling very disappointed. I found this odd; what was happening? Not wanting to waste too much time by making the long trek back to the truck, I decided to float some spawn instead. Eventually, I said screw it and grabbed the fly rod. Even though I didn't have the right fly for the job, I didn't care; I wanted to cast that fly rod and so I did. I think I spent a good hour doing so before we ended up changing locations. 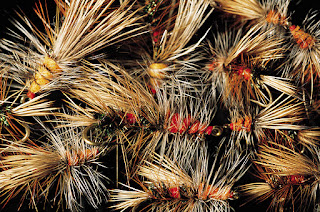 Once we arrived at our new spot, I grabbed the fly rod and my egg sucking leeches. This was it, no spinning gear, no bait casters, no spawn, no lures; it was just me, my borrowed 8-weight, and a couple of flies . I spent the next forty-five minutes fishing with something unfamiliar to me. Strangely, I enjoyed it. What is it about this “fly fishing” thing that is so addictive once you really give it a try? I didn't catch anything and quite frankly, I don't know if I did anything right but I found myself becoming obsessed - fly tying kits, fly fishing combos, fly fishing videos, it didn't matter. I was looking at this stuff like a sex addict looks at porn. What flies for what fish? What line weight for pike, bass, steelhead, kings? Floating or sinking line? I can't stop thinking about it.

What is happening to me?!
By BrookfieldAngler
Email ThisBlogThis!Share to TwitterShare to FacebookShare to Pinterest