From Zero to Hero

The last few times that I have gone out with Dan Sims, fishing has either sucked or something else has happened. I was thinking that either Dan or myself were a jinx to the other!

Last week, Dan and I headed to one of our favorite spots on the Des Plaines River for migratory fall walleye fishing! The previous night, Matt from MC Custom Rods had nailed a fat 27" eye! For our neck of the woods, that is huge. Knowing the location, lure choice, and that the fish were there...we figured it was going to be superb fishing. We were wrong - zero fish

A few nights later, we headed to a Lake Michigan tributary stream that has been producing steelies like nobodies business! Dan had caught multiple on three previous trips there, so once again we figure awesome fishing. We were wrong - zero fish 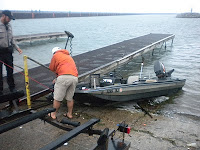 Last case study - About a month ago, Dan and I went king fishing. While the fishing action was fast and furious with Dan landing a nearly 18lb'er and me hooking up with several others, something had to go wrong.....Oh, that's right - MY FREAKING BOAT SANK! (It was the second time for Dan and a sinking boat - just sayin')


Needless to say, it would be pretty easy to understand my concern that one of us was a jinx to the other. After a lot of anxiety about this theory of mine, I decided to give it one more try. Dan, Dave (Dan's partner at Sims - Spinners), and I decided to head to another spot on the Des Plaines River that has produced walleye, pike, smallmouth, and largemouth bass in the past. The weather was cold, rainy, and windy which, to me, meant great pike weather!

Dave and Dan had beaten me there and were already on the water. As I went to put on my waders, I noticed that something felt weird. "Did I lose a ton of weight or did my waders get bigger?" I wondered. "Naaaa...."  Then, as I went to roll the built in gravel guards down, I said, "Wait a second...I thought my gravel guards were neoprene". I shrugged it off. Then I went to buckle my wading belt and said, "That's it....I didn't get any smaller and this belt is too big!" So, I called up Dan and asked if there was any chance he had accidentally grabbed my waders the last time we went fishing and left his waders in my truck. Sure enough....he said, "You know, I thought these felt a little tight!"

Once that mystery was figured out, it was time to fish! I quickly hooked up with one but couldn't convert. With a quick swoosh of his tail and a nice boil in the water, he was gone; it was a good sign, though! We worked that section of the river for a bit with nothing else to show for our efforts, so we moved downstream a bit. 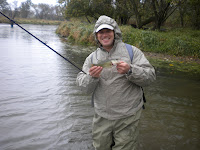 As we hit the next area, I noticed a nice grassy point. I cast my single number 5 bladed Sims Spinner a bit past the point and started my retrieve. A few cranks later - first fish of the day!  While he was no state record, it was a fish.


Dan was next to connect and it only took a couple minutes for him to succeed with this slightly larger bass. 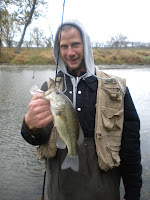 Then, as if there was some order to things, Dave hooked up with an even larger bass! 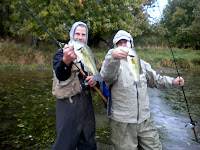 Action after that was fast and furious! We all hooked up with several more and even landed a few more. At one point, Dave and I had a double header.


Overall, it was great day out there despite the weather. Even more important is that I feel like the curse has been lifted. Although I still won't say who I suspect was the guilty party, I believe that we can actually get out there and start catching some fish!

For more fantastic pictures and details of the day, check out Dan's account over on his page.