Bowfin hunt - Returning to the scene

Ever since catching my first bowfin a couple weeks ago, I have been somewhat obsessed with catching another. This past Sunday, I had the morning free so I left the house at o-dark-thirty and headed to the spot where I got my last one. For the first fifteen minutes, there was plenty of activity. I could see them swirl as they created a wake under the thick algae blooms. Although it missed it's mark, I even got one to strike. This left me with with a LOT of hope for the day.

For the next 5 hours, I fished the water like a man on a mission. I worked top water baits in every possible combination, every speed, every pattern. Results? Zero

As I was getting ready to leave, I made one cast over some huge reeds into water that was invisible to me. I heard the frog land - I let it sit, gave it a twitch, heard a commotion, felt a tug, and set the hook! The winning lure was a Live Target 5/8oz yellow frog. These things are so realistic looking and I have had more consistent success with them than any other brand of hollow body frog. I know, I know....where's the picture of the catch?!

Well before I get there, let me finish the story....Last time I hooked up with a bowfin, I learned all about the strength and disposition of this fish. Knowing that I had that on the other end of the line, I set the hook like I was fishing for muskies. Imagine my surprise when the end of the line came flying through the weeds and splashed into the water ten feet to the opposite side of me!! Must have been a small bowfin, huh?!

Like I was saying before, those Live Target frogs look so real..... 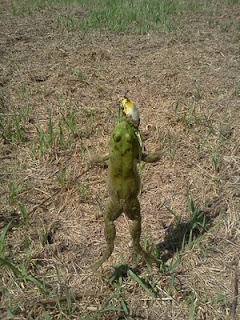 ....that even the frogs will eat 'em
By BrookfieldAngler
Email ThisBlogThis!Share to TwitterShare to FacebookShare to Pinterest