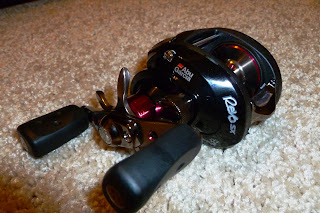 As a member of the Outdoor Blogger Network, I was lucky enough to be chosen to review the Abu Garcia Revo SX so I had them send me a 6.4:1 ratio, left handed, reel. I really wasn't sure what I wanted to use the reel for, so I took some time to figure what I was really missing in my arsenal. I finally concluded that I needed something to throw spinner baits in the 1-3oz range along with a heavy duty combo to fish some heavy slop. As a result, I spooled it up with some Suffix 832 braided line and paired it with a BPS Tourney Special - 7'6" heavy action rod.

I have to admit that I am a big fan of my Shimano Curado 201e7 and did everything in my power to stay open minded for this reel.

Initial impressions
As I pulled the reel out of the box, I thought to myself, "This thing looks stealth and means business!" Everything from the black aluminum frame to the black and beefy handle was pure business. I think the only part of the reel that had any "flair" would be the red anodized collar between the drag adjustment and body. It may just be me, but I love this look - stealth is sexy. I also noted some key specifications about the reel

Short term impressions
After a couple of hours of unavoidable comparing to the Shimano, I had one word to describe the Revo SX - that word is "WOW" After getting used to the profile and feel of the reel, and getting the brakes adjusted, this thing was flawless. Smooth casts and smooth retrieves were the only thing this reel was producing. If there was one complaint that I had, it would be that the profile is slightly large and took a bit for my non-reeling hand to get used to its size and shape.

*Note - I must also admit that I was using a new rod that has a handle that is much too large that MC Custom Rods will be fixing that for me soon. This may partially explain my complaint about the reel size/shape.


Long term impressions
I ended up fishing for about 9 hours with this reel and probably made around 1,400 casts with it. I had one small mechanical issue with it when one of the bolts that held one side of the body to the other side, fell out. Luckily, it didn't hit the water and I had a small flat head screwdriver on me, so it was a quick fix - although a bit annoying.

I hooked into two bowfin and a largemouth with it. The first bowfin was lost at shore when I was trying to get the boca grips in its mouth to land it. Judging by the visual and the second bowfin that came in at a hair over 3lbs, I estimate the first one to be around 7lbs. I'm not sure if you have ever hooked up with a bowfin, but a 3lb bowfin will put a 5lb largemouth to shame in terms of fight - now imagine a 7lb'er. When you add that to the super thick slop that these fish came from, I got a chance to put that drag to the test and "smooth" definitely describes it.

As the day went on, so did my confidence in this reel. Eventually, I pulled out the Shimano, tied on an identical lure that I had on the Revo, and started some distance casting comparisons. On average, I was able to get the Revo out about twenty feet further that the Shimano. Zero backlashes on either reels.

Conclusion
With a retail of around $170, it is fair to compare this reel with reels like the Shimano Curado. So how does it fair in that competition? I consider it a tie. The Revo SX is definitely a true contender in its class and I highly recommend buying it if you are looking to buy a serious reel, for serious fishing.

**The following review is my honest opinion based on my experience. I received the Abu Garcia Revo SX free of charge in exchange for a fair and honest review. Neither Brookfieldangler.com or its writers are sponsored or associated with Abu Garcia and received no other compensation for this review. **
By BrookfieldAngler
Email ThisBlogThis!Share to TwitterShare to FacebookShare to Pinterest