My goals are starting to be realized and BFA has officially found a new addition! I would like to welcome Tom Czapiewski to the team. He brings a new perspective to the site as an avid kayak fisherman. Without further ado, here is Tom's bio:
_____________________________________________________________________________
Like many of us, I started fishing with my father and grandfather when I was too young to remember. They would take me up to the North woods of Wisconsin and instilled a sense of ethics and sportsmanship which I carry with me to this day. I learned on the lakes and rivers up in Wisconsin how to fish primarily for walleye and pan fish. I remember however, when we would be fishing on rock piles for walleye and a big musky would come up and hit at the boat. This made me want to get one of these monsters on the line. As I grew, I wound up spending many months of my youth up in these waters and guided on several lakes for walleyes and musky. 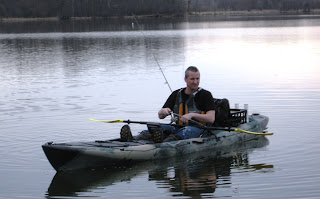 I then went into the United Stated Air Force and it would be many years until I wet a line. I was just not into anything after I came back from the Persian Gulf. It was actually two years ago when I lost my job. With things looking pretty bad, I started to reconnect with nature. I was thinking that there are many lakes around my house and I should check out what fish inhabit these waters. I started to check out some local fishing websites and was hearing that some of these waters held good populations of walleye, largemouth bass, smallmouth bass, and musky. I got myself a cheap rod and figured I had no shortage of time on my hands and gave it a try. I was pleasantly surprised with the luck that I had in and around the area. So needless to say, in the off season, I stocked up to get ready for this season. I bought some better rigs and tackle; then wanted to purchase a boat. I fell short of this goal due to some financial shortcomings and then saw kayak fishing.


I did some research and in March I purchased my first fishing kayak. I have fished this season from both shore and kayak and have done surprisingly well. The kayak turned out to be a great addition to my fishing arsenal. I can fish in spots that people in boats can only dream of getting into.


My kayak is an Ocean Kayak Prowler Trident 13 angler that is outfitted with one camera mount and four rod holders. I have a sonar unit which is a Humminbird 597ci HD with down imaging. This is proving to be a deadly combination because I can identify structure that I never would have seen, otherwise. This is a work in progress but I can tell you that it’s only the beginning of the story and can not wait to see what other adventures are in store!


I still like to fish all species and have been focusing on largemouth and smallmouth bass. I also still have a love for walleye fishing because they tend to test the best of anglers at anytime in the season.
By BrookfieldAngler
Email ThisBlogThis!Share to TwitterShare to FacebookShare to Pinterest