Last fall, I saw an ad on craigslist for a musky guide in Indiana. I thought that it sounded like a blast and a great opportunity to catch a fish that isn't very common in the waters closer to my house. I talked to my buddy, Scott, at work and said, "Hey Scott, want to go catch some musky in Indiana?" Almost instantly, he was on the phone with his wife and got the green light. I clicked on the link provided on the ad and came to Vince Weirick Guide Service. After browsing his site, I thought this guy seemed cool and it seemed like he knew what he was doing, so I gave him a call and booked an appointment. We ended up going out with a guy named Randy who also guides with/for Vince. Randy was one of those guys that you just instantly like. You could tell he had a passion for fishing, loved doing what he was doing, and cared more about getting you on fish than just doing a quick trip, getting you out of there, and collecting the money. Vince's entire operation is set up that way. They both love fishing, especially for musky, and love getting their customers on fish. Scott and I ended up each catching a fish that day. The conditions were everything that you don't want when you are out hunting muskies. It was almost 90 degrees outside, blue bird skies, and not even a hint of a breeze. I think the only breeze I felt that day is when Scott sneezed. As we pulled in to the docks at the end of the day...beat up, tired, and sore...we found out that we were the only boat out there to land any fish that day.

After that, Randy, Vince, and I had kept in contact on a semi regular basis whether on Facebook or over the phone. Heck, they even gave me a hat at the fishing expo that has turned out to be quite lucky! Randy also told me that he would get me out for some ice out fishing in the spring. As that time approached, Randy kept telling me to hold off. Fishing wasn't as hot as it usually was. What guide service cares about their customers that much?

In the coming weeks and months, Randy would send me random messages about the fishing out there. It finally seemed as if fishing was picking up a bit, so I gave Vince a call and I booked my trip for 2011! Vince let me know that I could go out with Randy again since we got along so well the last time. I sent Randy a message saying, "I'll see you in a couple of Sundays!" He responded by saying that he only has a half day appointment the day before and he'd be more than happy to take us out for the rest of the day if we could make it.  That offer was too hard to pass up, so Scott and I headed up late Saturday morning and met Randy at the lodge we were staying at. He said the recent rains and an unfortunate weed kill on Webster Lake had really put the musky in a funk on the main lakes. Instead of fishing where we were going to go originally, we went to the lake that Randy referred to as a "honey hole". When we got there, the water was clear, there was only one other boat out there, and I could just feel it!


We got set up with our gear and tackle, and we were off fishing!  Within a few minutes, Randy had a follow on a Bucher Shallowraider. Knowing that was getting them to move, Randy gave me that lure and hooked Scott up with a slightly different style swimbait while he threw some giant top water lure on his line.  About an hour or so later, I was getting used to that jerk bait. jerk, jerk, jerk, pause...jerk, jerk, jerk, pause...and repeat. As we rounded a point, Randy said this is a good spot. About 5 casts later, I cast it within inches of the weed line and started my retrieve. Jerk, jerk, jerk, pause...jerk, jerk, jerk, pause...jerk, WHAM! All of the sudden it felt like I just jerked into a pontoon boat headed the other direction! The drag on the Shimano Calcutta 400 was peeling and as I looked at the 8' St. Croix Premier Musky Rod being bent in half I exclaimed, "FISH ON!" Just after that, you could see a huge boil where the musky started her three bone jarring head shakes. The water so clear that 40 yards away you could see her flash of silver every time she twisted her massive body trying to get away from this thing she just ate. After a couple of minutes I had her near the boat. Randy was waiting with the net, but she wasn't done. She splashed around the surface before heading back down as deep as she could go. Luckily, Randy keeps his gear in good shape and has super sharp hooks on all of his tackle. We noticed that you couldn't see any of the lure the first time she surfaced. After coming back up, splashing, and going back down a few times, Randy noticed that there was only one hook left in her mouth! I  heaved the rod upwards and started sweeping it towards Randy. He swooped in with the net and she was in!!! I took a quick breather while Randy grabbed some pliers and his measuring board. I grabbed a pair of musky friendly hand savers and with a couple quick tugs and twists, Randy had the hook out. Then came the fun of trying to get a hold of her gill plate! Apparently, just because she was in the net, the fight didn't end. I got soaked as she kicked and splashed every time I almost had her ready. Finally, I got a good hold on her and heaved her up. Her head was massive, her body was chunky as can be, and my tired arms felt every pound of her. 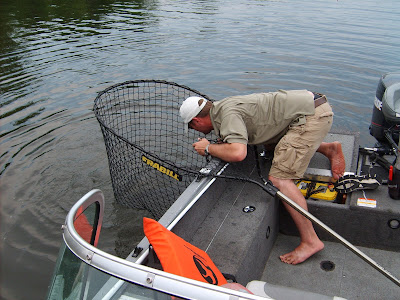 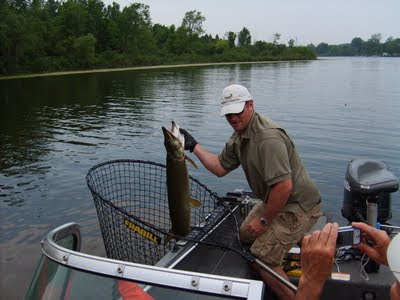 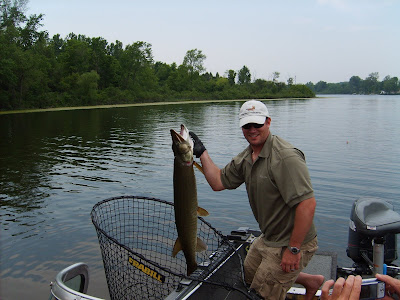 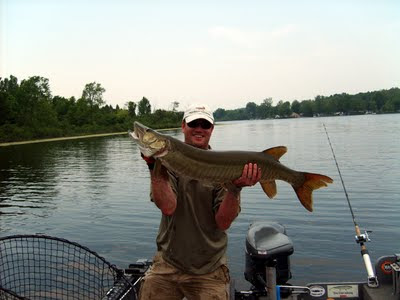 We got her measured, snapped some photos, and got her back in the water. She was a bit slow to start kicking on her own, so I took my time with her. Back and forth, back and forth, back and forth as I tried to get some water flowing through her gills. This felt like an eternity as I kept repeating to myself, "I hope she's okay." Finally, after a couple of minutes, she gave a few good kicks and down she went. I love catching them, but love it even more when they swim away.

We continued fishing into the semi stormy evening. We were dragging a bluegill off the back while we continued casting. About 45 minutes after getting the first fish released, the bait clicker started chirping. Randy handed the rod off to Scott and told him to reel down and then try to "break his rod". Scott, without hesitation, did just that! The hook was set and the battle was on! Very shortly into the battle, the hook came flying back at the boat and the beast at the other end was gone. We kept moving and Randy was still tossing his buzz bait out on the other side when I heard this huge splash behind me. I turned around and Randy was hooked up! Being the awesome guide he is, he said, "Here Scott, grab this!" So Scott was once again hooked up! I reeled in my line and headed to the front of the boat while Randy got the bluegill rod out of the way. He said, "Hey Nick, do you want to net him for Scott?" It was a definite yes from me and I was honored that Randy had enough faith in me. I suppose the relationship that we have built over the past year let him know that I knew what I was doing. I told Scott to try and get the head up as he moved the fish towards me. He let out a grunt as the fish headed back deep. I patiently waited for the opportunity and then swooped in and had musky number two in the net! Just like before, Randy got the board out, we snapped all kinds of pictures and Scott had his 41" musky!


We decided to call it quits shortly after that since I was getting eaten alive. Besides, it was already nine at night and it had been a long day.


The next day we headed to the same lake. We got out early and had a ton of follows but nobody wanted to commit. We did a lap around that lake, then pulled out to grab a bite to eat, and headed to Lake Tippecanoe to fish the mid-lake break lines. We knew the schools of shad would be out there so the plan was to cast into them with shad imitators and see if we could trigger something there. That didn't seem to be working so we headed to the lake where Scott and I had caught our fish last year. We fished all of the high percentage spots that Randy and Vince have dialed in. Unfortunately, there were no takers, so back to the lake we started at! Scott and I had to start getting home so Randy hit all of his high percentage spots there and unfortunately, we couldn't even get any followers this lap. With that, we were tired and had a bit of a drive ahead of us, so we called it around 5:30.


If you want to go catch some musky down there in Indiana, check out Vince's website (http://www.vinceweirick.com) and give him a ring at 574-551-0214. Make sure you tell him that Nick sent you and maybe I can get a discount on my next trip if enough people call! HA-HA!
By BrookfieldAngler
Email ThisBlogThis!Share to TwitterShare to FacebookShare to Pinterest