Best fishing day in long time and a new species!

The plan today was to meet up with Dan Sims of Sims Spinners, and Matt with MC Custom Rods, to hit the river in the evening for some summer pike action. I left around 6pm so I could get out a few minutes before they arrived. When I did arrive, I parked the truck and went to the  back so I could put my little wading box together with the lures I planned to use for the evening. As I opened the back of the truck, I said to myself, "Hmmm where the heck are those three boxes?" Instantly, I thought they may have been stolen - then I was figured that wasn't the case. My next thought was that I left them at home. Nope, that wasn't it.

And then it hit me....the other day, I took the wife fishing because I needed some photos for Matt. (The write up on that day can be found here.) Towards the end of that day, those little blood suckers with wings were really biting, so the wife and I rushed to the truck and called it a night. What I didn't grab before we left, were those three boxes of lures I was looking for today. Keep in mind, this was playing in my head like a motion picture at an IMAX theater. It was so clear. I knew exactly where I left them and knew exactly what happened.

I was sick to my stomach. In those three boxes contained no less than $100 in spinners, $50 in stick baits, 4 Live Target frogs, and various other stuff. Needless to say, I WAS PISSSED!!!! At that moment, I couldn't care less about fishing. All I wanted to do was head to the house and be pissed at myself for losing that much tackle. How could I be so absent minded? How could I be that stupid?

I called my wife and told her what happened. In her infinite wisdom and optimism, she says, "Well you should go back and see if they're there." I muttered in my head, "Yeah right...this was two days ago. How could you be that naive." Of course I didn't say that aloud. Instead, I said, "Good idea babe...it's worth a shot."

So off I went...five minutes later I was at the spot. I got out of my truck without even shutting it off. I raced to the top of the small hill and what do I see? MY THREE BOXES OF TACKLE!!!!!!

I couldn't believe my eyes. How could this be? Am I dreaming?

I raced down the hill, swooped them all up, and immediately I was happier than a kid on Christmas morning.  I called the wife and told her the good news and how happy I was.

With that, I decided to head back to the spot where Dan, Matt, and I were supposed meet. I threw on my gear and started fishing. At this point I didn't care one bit about catching a fish.

And then it happened...I caught a new-to-me species!!! I won't spoil it with words. Instead, I'll just say that this river always surprises me and leave you with a photo.... 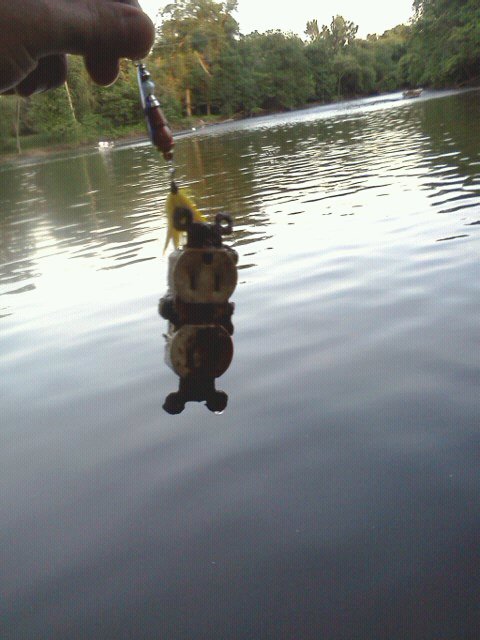