Monster Piking on the St.Joe 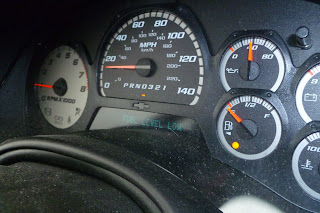 Dan Sims, Gary (BeachPig to some), and myself set on a plan over the past weekend to head to the St. Joe River near Niles, MI for some big pike. Gary hit my place around 6:15 in the morning with his great tracker boat in tow. From there, we headed to meet Dan and we were on the road. Gary was a bit low on fuel, so we planned to stop in Indiana where we were hoping it was a touch cheaper. Just a tad over the Illinois/Indiana border, we hit some heavy traffic from an earlier accident. As a result of the sea of metal in front of us and the pending nightmare of running out of gas, we decided to get off at the nearest exit for some gas. It seemed as if we had picked the wrong exit because there wasn't a gas station in sight and if there was, it was no longer in business. As we were driving along, I decided to take a few pics of the local architecture that Gary, IN has to offer.


Luckily, we finally found a gas station that was actually open for business! The down side of this is that Dan and I really had to hit the bathroom. Two cups of coffee has a way of putting some pressure on the bladder. Unfortunately, this station didn't have one, though judging by the neighborhood, this wasn't much of a surprise. So Dan heads around the back of the building and does his thing. As he is heading back he tells me to look to the right of the dumpster. Naturally, I do and what I find is quite a metaphor for the condition of Gary, IN. Right out in the open, with a street less than twenty feet away, somebody found comfort in dropping a duece. I'll spare my faithful readers the pictures.

Anyways, back on the road and off to the river! We made one more quick stop at a small bait store so Dan could drop of some lures. Once we arrived, we got the boat launched. Even though Dan and Gary thought I was nuts for wearing shorts, it was a very helpful in getting the boat launched. Once we were all in the boat, it we headed a quarter mile up river to a great looking creek entrance with a bit of an island that provided some great break in current and some good back flows. On the fifth cast, Dan calmly says, "Fish". I turn around and see his rod bent in half, so I get my line in and grab the net! After a good fight, I get the net around a very healthy looking pike. We didn't measure it, but I estimate it to be around 30" to 31" . I have caught a few pike in the Des Plaines that are just as long, but I couldn't help but note how much fatter the pike were in the St. Joe. Seeing as how we were five casts in to the day and we already had one in the boat, we all figured this was going to be an epic day! We fished that bay a bit more and then headed up river a bit.

Once again, we find a great looking section that has plenty of current breaks and lots of good looking structure. We fish that for a bit and it's starting to seem that there isn't much there. On one of the last casts, Dan hooks up again. Just like last time...line in, net out, and what do we see? A healthy looking 17" largemouth.

At this point, Gary and I tell eachother, through some jedi mind games, that Dan isn't allowed to fish anymore until we catch a fish. This two to nothing garbage isn't working for us! We continued to find spots like this throughout the river system, but our early luck seems to be letting us down throughout the day. Poor Gary is throwing everything at them, but just not getting anything. I am still sticking to my Sims Spinners and remember a spinner that I had Dan make for me a while back. It is basically a red/white double #5 bladed inline spinner with a single Gamakatsu ewg hook instead of a tradition treble. I pull that out and throw a sassy shad on the hook as a trailer. The brilliant part about this is that it is virtually weed proof! I was throwing this thing through the thickest stuff out there and coming up clean every time.

We finally hit a bay that got all of our hearts racing. I ended up watching three pike flash at my lure, but never hooked up with any of them. Gary had one or two tease him as well. I think Dan had one there as well, but came up empty. We left that section and decided to drive up the river and see what could find. It was high, moving fast, dirty, and full of debris. I must say that it is a very nice looking river and I will gladly fish it again. On a day with better conditions, that epic day we were all hoping for will positively happen.

Once we turned around, we decided to drift the bank down river until we hit the launch. A little bit later, I got a phone call from the wife. After a brief conversation, I hung up and Dan said, tell her to send some luck! I chuckled and then remembered that I wasn't wearing my lucky hat! I quickly found it, put it on, and cast it out. As I was casting I was in the middle of telling the others that we should head back to the first bay where Dan caught his pike earlier. About half way through the sentence, I felt a sharp jerk and it was fish on! This time, it was Dan who was reeling his line in and grabbing the net. We quickly scooped up my first of the day! I kind of had to chuckle at this fish. The lure that I described earlier, was about 8" long. The fish that tried to eat it was about 12". If that isn't heart, I don't know what is! The good news is that I had confidence in my lure creation now. I knew it would attract fish, but I wasn't sure how well it would actually hook up. After this fish, I figure that if he could eat it, the big girls could too.

That was about it for the day. We did make it back to the first bay, but it didn't produce a second time. The rain was starting to really come down, and Gary was getting frustrated. Apparently he through one too many lures in to the trees. We've all had those days....
By BrookfieldAngler
Email ThisBlogThis!Share to TwitterShare to FacebookShare to Pinterest