BrookfieldAngler gets a new custom fishing rod and goes to Georgia

My latest work trip has taken me to Atlanta, Georgia for the 2011 Interwire Show. This particular show has a very long set up period so I have had a bit more free time than usual. I took advantage of this free time to go explore some fishing spots around the city.

Before leaving, I received my new custom travel rod that I had built for me by MC Custom Rods. Since I travel quite a bit for work, I wanted a light tackle spinning rod that I could fit in my suitcase without much hassle. After looking around at what was out there, I came to a couple conclusions. The first was that travel rods cost a ridiculous amount of money. The second conclusion is that there is a limited selection on travel style rods and the ones you have aren't very good. These conclusions led me to MC Custom Rods. I told them exactly what I was looking for and what I expected in terms of quality. As a result of this conversation, I was given this beauty.

The new travel rod is 6'6" long when fully assembled. It features an amazingly comfortable cork handle, micro guides, and these red/orange wraps that just radiate in the sun. When you break it down, there are three pieces no longer than 27.5" which fits perfectly in my suitcase.

~Now time for the test! 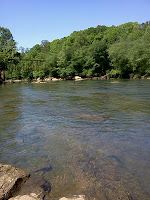 On Friday, I stopped in a local Atlanta fishing shop called The Fish hawk. It is located in the Buckhead neighborhood of Atlanta and staffed by a bunch of pure outdoors guys. As soon as I walked in this place, I could tell these people were into fishing and the outdoor lifestyle. Their main focus is fly fishing, but they have a sufficient selection of standard tackle as well. I quickly sparked up a conversation with one of the guys working there to find out where the good fishing is in Atlanta. They suggested that I head to the lower Chattahoochee River just below the dam at Lake Lanier. The guy was cool enough to draw me a map that took me right to the spot he recommended. I wanted to target some river trout so he suggested his personal favorite lures and colors. After a short drive, I arrived to a section of the river called Settles Bridge. Immediately upon my arrival, I was taken back by the amazing clear water and fantastic scenery. 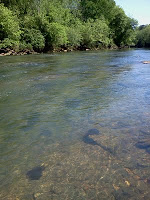 I spent a little bit walking down stream and taking it all in. I then took a minute to tie on my Rooster Tail with white skirt and gold blade before walking the bank in search of that ideal area I had in my head for trout. Keep in mind, I have never fished for trout nor have I ever caught one. I had this picture in head of trout sitting behind rocks in shallow, but fast moving cool water. I could hear some faster moving water ahead so I trekked on. What I came across was an area that matched that picture perfectly. There were some obvious rocks and pools that fit my preconceived notion of what a trout stream should look like.

I immediately started casting upstream and figuring out the feel of water and the action of lure as it was swept down the current. I played with different retrieve speeds and found a perfect combination that kept the lure slightly off the bottom but allowed the single blade of the Rooster Tail to barely spin. Shortly after figure this magic retrieve out, I felt an aggressive little tug on the medium light 3 piece rod and saw a quick flash of a fish resulting in a nice hook set. With that, I retrieved a fish that I have only seen in pictures and on TV. 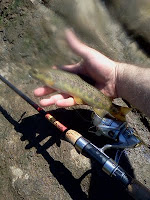 I fumbled for my phone and enabled its camera for a quick photo opportunity. The colors of these little trout are spectacular. His spotted pattern and rainbow of colors can't be captured by my inadequate cell phone camera. They are quite a feisty fish and do not sit still long enough to really get a good picture. This feistiness resulted in missed photo opportunities of two more fish. On the second fish, I dropped the phone as I was trying to quickly get it ready to take a picture which resulted in the battery falling out. On the third fish, I just couldn't keep my hands on the fish! He was the biggest coming in around 13 to 14 inches and the least happy about being caught.

I could have stayed out there for hours exploring the river but without my waders, I decided to call it quits after three fish. I have a new found respect for these fun fish of the current and if I ever get down here again, I am making sure I bring my waders and a 3wt fly rod. Hopefully, I can bring someone with who will have the camera ready! Then again, the camera can be a jinx sometimes, so maybe I'll leave it at the hotel.

The new rod performed great and is exactly what I was looking for. If anyone is interested in ANY style rod and want MC Custom Rods to build you one, send Dan Sims an email at Dan@sims-spinners.com
By BrookfieldAngler
Email ThisBlogThis!Share to TwitterShare to FacebookShare to Pinterest