I have this little pond near me that I like to call my "honey hole". I found it last year on my quest for ponds close by that would afford me some after work fun. It's one of those ponds that I can go to when I only have an hour to fish, but I want to  catch a few bass and go back to whatever responsibility it is that I have waiting for me.
I have fished it a few times this year without any success at all. I was beginning to think that my honey hole dried up. Possible fish kill? I keep hearing reports about all this great pond action that is heating up all around me in other nearby suburban ponds and was really getting disheartened at the thought of my pond being dead.
I decided to pay another visit this afternoon and give it another shot. With all this rain that we have been having, I knew the water temps were down so I was thinking that a texas rigged Senko, dragged ultra slow along the bottom was going to be the ticket. So I tied on one of my #21 black/blue flake 5" Senkos and worked the bottom. About 3 casts into it..tap tap tap. WOOHOO, a bite!! Finally a good tug, so I set the hook. Nothing! I reeled in real quick and the Senko was curled up on the hook. No biggie...reset the worm, recast, slow reel....tap, tap, tug...set the hook and NOTHING! ergggg!! Now I'm getting aggravated.  I reel the line in and that Senko is destroyed. What the hell?! Throw another on there and try it again. Sure enough for the next four casts, it was essentially the same thing. I am thinking to myself, "What the hell? Why aren't these fish just committing?" I was also muttering to myself, "Great..there goes another $8 for a new pack."
Then I got to thinking. I received some worms from a local company called StankX. They have a similar bait they call a Stix. I also remember talking to another local fisherman and blogger that uses their plastics religiously. He told me that for whatever reason, fish just seem to bite these "stix" and hold on. I reached into my bag to see what colors I had and sure enough, I have a bag of 5 1/4" Stix in color #16 / JP HHF. It's an interesting blackish/gray with blue flake. It looks super close to the Senko color that I had been getting bites on.
So I throw it on and cast it out. About 4 seconds after hitting the water, the line starts to run to the right, so I reel in the slack, set the hook and what do you know? FISH ON!! A short, but stoic fight ensues and I have my first bass from my honey hole in 2011!! 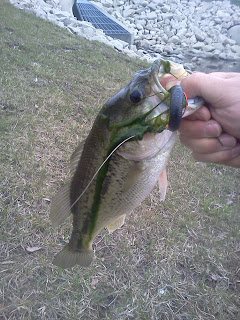 So what is the difference? Why all of the sudden with a simple change of a brand stick bait, did it all come together? Why did the fish just grab and hold the StankX Stix but not the Senko? Was it pure luck? Had I just pissed this fish off so many times with the Senko that it said screw it, I'm eating this thing? To be honest, I have know idea.
What I do know is that this pond has not produced a fish for me all year until the first cast with the Stix. Was it a fluke? Possible. Will this worm always out fish the original Senko? Perhaps not, but it sure did this time!
What was even more impressive is that I released the fish, checked the Stix and it was not only still in tact, but it looked like I just put it on! These things are definitely much more durable than any Senko. This will hold true anytime. The action on the Stix is slightly more lively than the Senko. This will also hold true anytime. The Stix is much, much, much cheaper than the Senko. This will definitely hold true all the time.
Conclusion? If you are looking for a truly worthy stick bait as an alternative to a Senko, you just found it.
By BrookfieldAngler
Email ThisBlogThis!Share to TwitterShare to FacebookShare to Pinterest