The biggest bass that I have ever caught....

....at the Lasalle cooling lake in Lasalle, IL was caught this Saturday.

My best friend, Jason was coming to town for Easter with his wife and new baby girl, who just so happens to be my god daughter. I have know Jason since I was 12 years old and he is just one of those friends that is always there. Jason told me a couple of weeks ago that he wanted to go do some fishing when he came up so my original plan was to hit one of the rivers around here, but with this absurd amount of rain that we have been getting they are all pretty much blown out. Wanting to up the odds of him getting on a decent fish, I decided that a cooling lake would be a good place to try. I have never fished Lasalle, so it was really a great opportunity to try a new spot as well.


I also gave my friend Gary a call to see if he wanted to get out fishing. I met Gary last year when he was gracious enough to take out on the chain of lakes for a round of muskie hunting. We ended up going out a few times last year and while we never caught a muskie, we never caught the skunk. Between the 20" plus largemouth, the fat channel cat, or the behemoth carp, we always ended up getting something. Gary is a cool guy that is always willing to take someone out fishing. I was excited when he said he was free and would love to hit the water with us.

Saturday morning came around quick and I picked Jason up for our hour and a half drive out to Lasalle. Gary was bringing his boat and lives pretty far north, so he just met us there. As soon as we pulled up, we made a quick note of how windy it was. The forecast said that it would be dying down as the day progressed so we didn't worry too much about it. We got the boat launched and found our target areas so we started chucking lures. It was a semi cloudy morning with quite a bit of chop along the rip rap shore of the breakwall so I decided that a chrome rattlebait would be the ticket. I hooked Jason up with a jig and twister tail due to their ability to catch a myriad of fish species. About half way down the break wall, I cast my rattle trap a few inches from the rocks and started reeling in. About four or five cranks of the handle later, I felt a hard tug and I set the hook. It was easy to tell that this fish was PISSED about having a hook in it's mouth. He was yanking and jumping doing whatever he could to get rid of it. After about a minute, Gary swooped in with the net and we landed the biggest bass that I have ever caught from that lake. Coincidentally, it just so happens to be the only bass that I have ever caught there, so competition was pretty lacking.  So without further ado, here is a picture of the HARDEST fighting one and a half pound bass that I have ever come across. 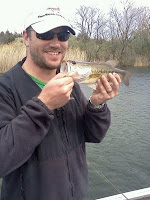 Shortly after that, the winds got even worse, so we decided to find a spot that had some shelter from the wind and cast a bit there. Gary caught a little feller that was twice the size of the crankbait we was throwing.  Aside from that...we got nothing. We decided to call it a little after 11am and head to another lake. Unfortunately, that lake turned out to be some tough fishing and all we managed was this little guy on a black/blue swim jig with a mister twister sassy shad trailer.

Still, it was a fun day out there. As always, there were lots of laughs and things to be learned. I got to fish two new to me bodies of water and managed a fish in both places. Really not too bad of a day!